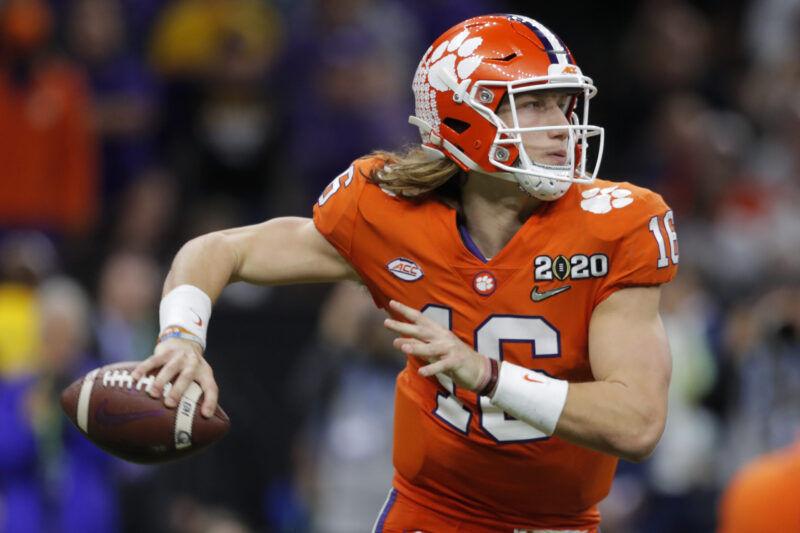 A strange, shortened, and, in some cases, absent college football season makes this year’s NFL Draft one of the most unpredictable in recent memory. There was no combine, and only scattered player pro days and limited face-to-face interviews. Will teams be willing to take risks or go with the tried and true?

Hard to say exactly, but this is our best guess as to the headlines that will be made during Thursday night’s first round.

If you don’t have a franchise quarterback, you don’t have a shot at the Super Bowl. That is the reality of the NFL, and that is why it is a certainty that the top three picks will be rookie signal-callers.

Trevor Lawrence goes No. 1 to the Jaguars, Zach Wilson goes to the Jets at No. 2, but who do the 49ers take at No. 3? It will be a quarterback, and if it’s Mac Jones, don’t be surprised if there are a number of teams on the phone with the Falcons trying to move up to No. 4 for Trey Lance or Justin Fields.

The Broncos are sitting at No. 9, and if the quarterback they covet is still on the board at No. 4, the Falcons could get a haul of picks from Denver. The Bears, or even the Patriots, might also have an eye on moving up for one of the top quarterbacks.

The Ravens have their quarterback, but they also have a lot of picks. Ten picks to be exact, including two first-rounders, two thirds, and two fourths. Look for Baltimore to package its picks and move up to grab one of the best wide receivers on the board.

The Chargers have nine total picks, including No. 13 in the first round. If there is an opportunity to grab a top offensive tackle or tight end Kyle Pitts, don’t be surprised if Los Angeles makes a move. It wants to surround Justin Herbert with as much offensive talent as possible.

With confidence in second-year quarterback Tua Tagovailoa and holding first-round picks at Nos. 6 and 18, the Dolphins get a section all to themselves. Look for them to use the sixth pick on LSU wide receiver Ja’Marr Chase, then make a big trade with someone for the No. 18 pick.

They have lots of draft capital and could move up, down, or into more picks for the future. Whatever Miami ultimately decides to do, when the first-round grades are given out, look for it to score quite high.

If you are an independent bookmaker looking to capitalize on NFL Draft betting, the clock is ticking. We’re also coming up on the NBA and NHL playoffs, and you don’t want to leave that money on the table.

With WagerHome.com as your pay per head partner, you get your own customizable website, access to their full menu of sports and betting options, plus EZ live betting. See a demo today at WagerHome.com and get your first four weeks of service absolutely free.