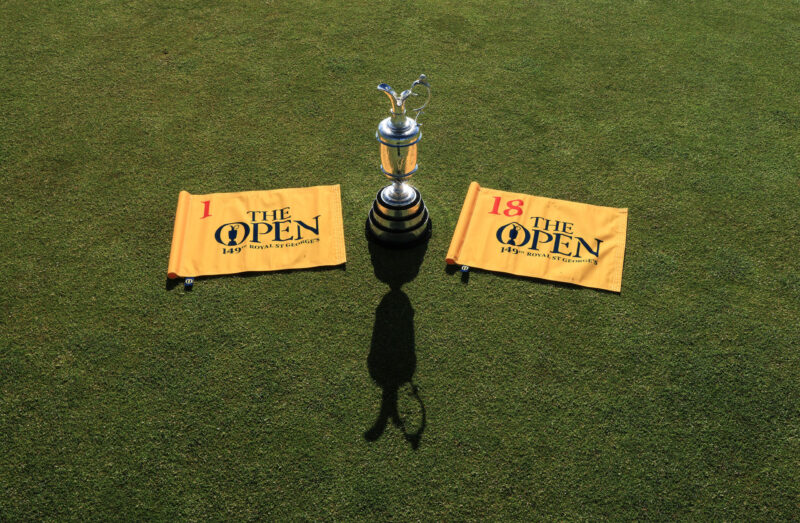 The Open Championship is back this week after the 2020 major tournament was canceled due to strict travel restrictions brought on by the COVID-19 pandemic. The 149th playing of the tournament will be held at Royal St. George’s Golf Club in Sandwich, England, along the country’s eastern coast. This will be the 15th Open Championship and the first since 2011 teeing it up at Royal St. George’s.

Shane Lowry hoisted the Claret Jug and was named the “Champion Golfer of the World” after a six-shot victory in 2019. Lowry (+8000) was a longshot champion, and there have been four players that have won the Open Championship ranked outside the top 100 since 1996. Two of those winners came on this golf course.

We’ve covered the favorites, so now we’ll look down the board and target some underdogs and dark horses who could bring us a hefty payday with a victory this week.

Both Darren Clarke (2011) and Ben Curtis (2003) were heavy underdogs when they won the Open Championship at this venue. That gives bettors hope that a player down the odds list could take home the Claret Jug.

The South African golfer is a three-time winner on the European Tour. Christian Bezuidenhout missed the cut in 2019, his first Open Championship experience, but made the cut in all three majors this season. The 27-year old is the 45th ranked player in the world.

Another South African player, Garrick Higgo has flown up the OWGR this year to 40th in the world. Higgo is just 22 years old but already has a three European Tour and PGA Tour victory to his name. This will be his first time teeing it up in an Open Championship.

Matthew Fitzpatrick lost in a playoff last week at the Scottish Open, so he’s coming into the Open in good form. The 26-year old former U.S. Amateur champion is a six-time winner on the European Tour and logged his best finish in an Open Championship in 2019 (T20).

Lee Westwood has had a bit of a resurgence of his career this year with a pair of back-to-back second-place finishes at the Players and Arnold Palmer. The veteran golfer has five top-5 finishes at the Open Championship, including a T4 in 2019. The 48-year old finished T35 last week at the Scottish Open.

Jason Kokrak has a pair of PGA Tour victories this season and three other top-10 finishes. Kokrak hasn’t had much success in majors this season, but he ranks 15th in Strokes Gained: Total and 4th in SG: Putting and those two numbers cannot be ignored this week.

Are you a bookmaker looking to expand your exposure and business? Team up with one of the top pay per head software providers in the industry. When you partner with Wagerhome.com, you’ll get a customizable website that is tailored to your brand, along with access to an extensive array of sports and betting options.

You can view a demo today at Wagerhome.com and get your first four weeks FOR FREE!